ANTI/body is a site specific installation event in multiple locations around Tucson and an emergent collaboration between the Tucson Art+Feminism Collective and local artist Natalie Brewster Nguyen.

ANTI/body is a social response to the pandemic crisis and a springboard for creation; Nguyen has invited local artists to respond to a broad spectrum of inquiries linking to the guiding theme of this year’s Art+Feminism Campaign, Art+Activism. The artists are all women/trans/non-binary/queer/POC artists whose work crosses genres and mediums. They are collectively using this moment to demonstrate the incredible adaptability and relevance of art in hard times.

All installations are intended to be enjoyed from a distance, whether in a car, on bike, or on foot. We ask that participants follow social distancing protocols put forth by CDC. The soundtrack can be played on a personal device, headphones are recommended. ANTI/body can also be experienced virtually, by viewing photos of the installations on the map and engaging with the soundtrack.

Art installations and soundtrack will launch on May 15th, 2020 at 4:00pm and be available for viewing throughout the following week, or until the elements destroy them.

For more information about the 2020 Tucson Art+Feminism event, see our Event Details. 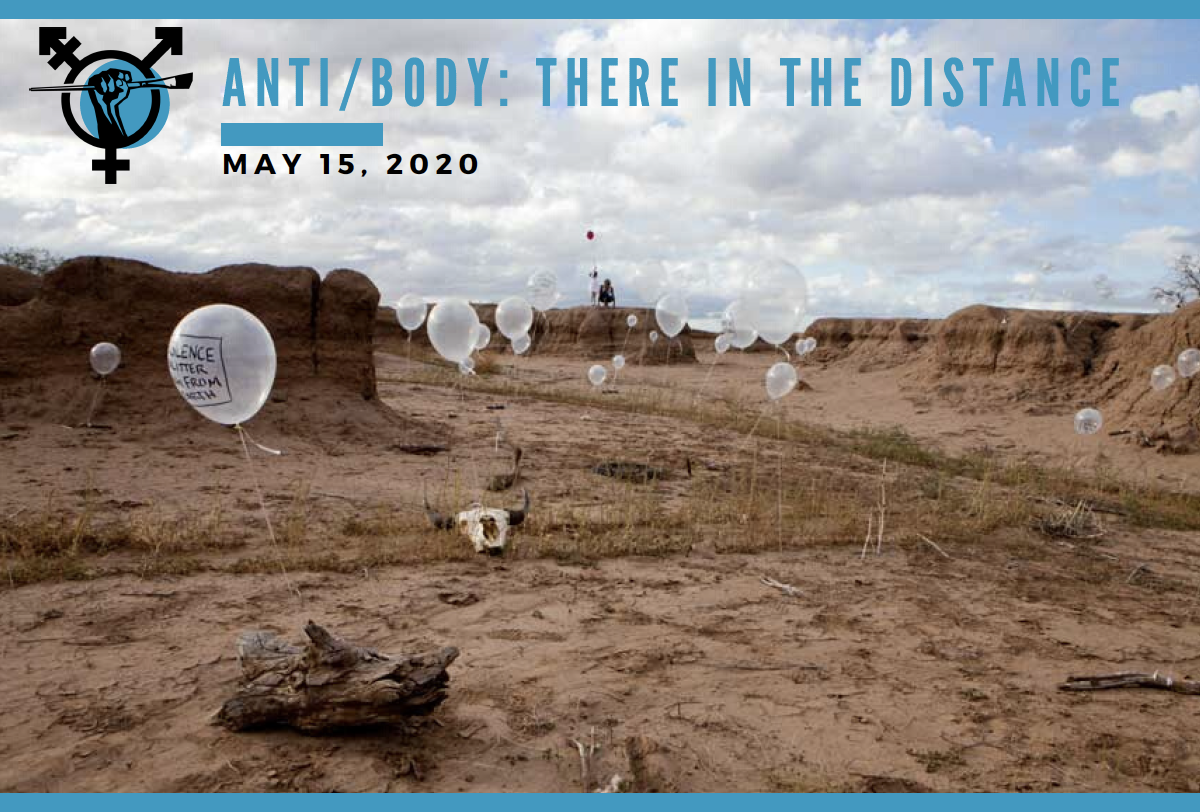 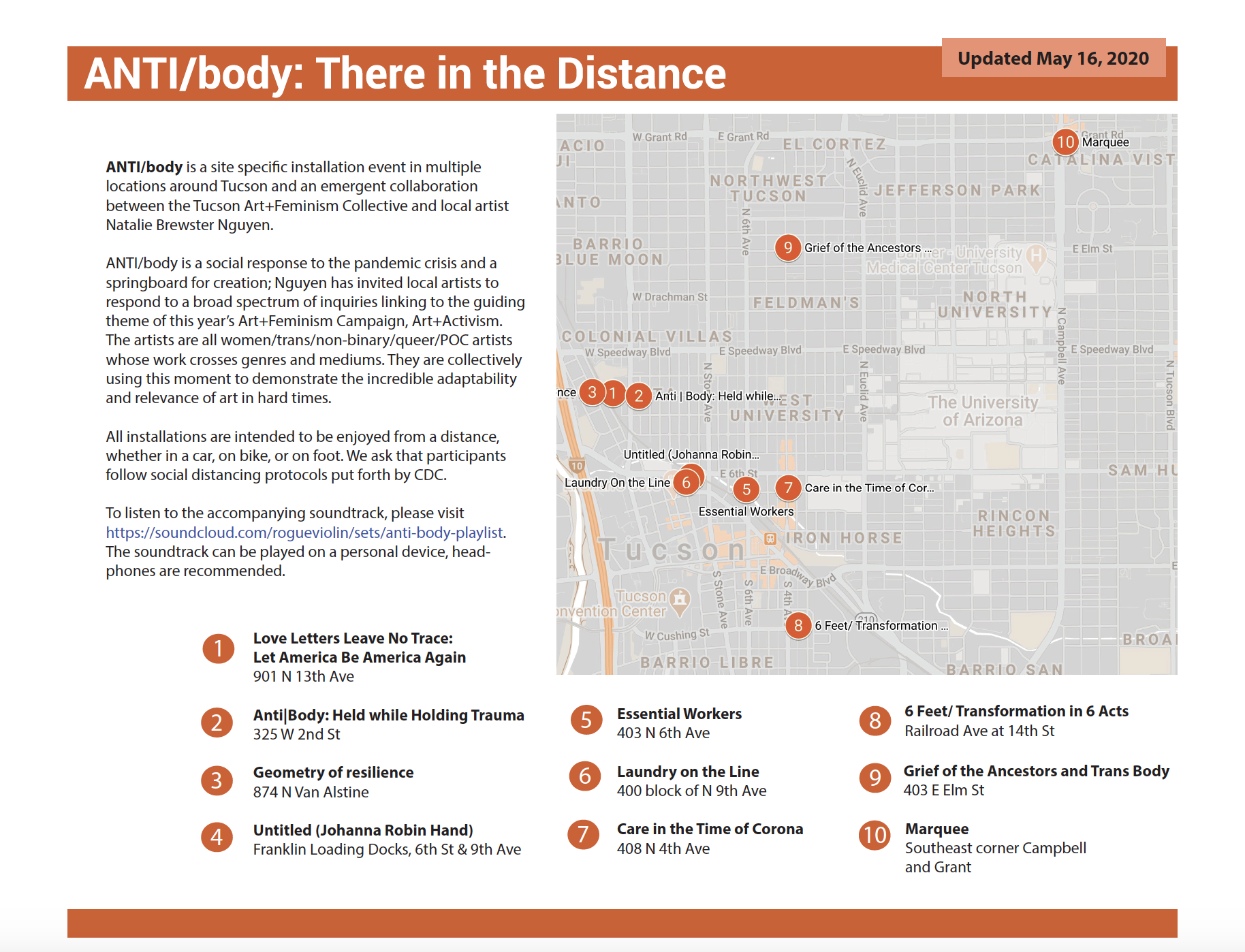 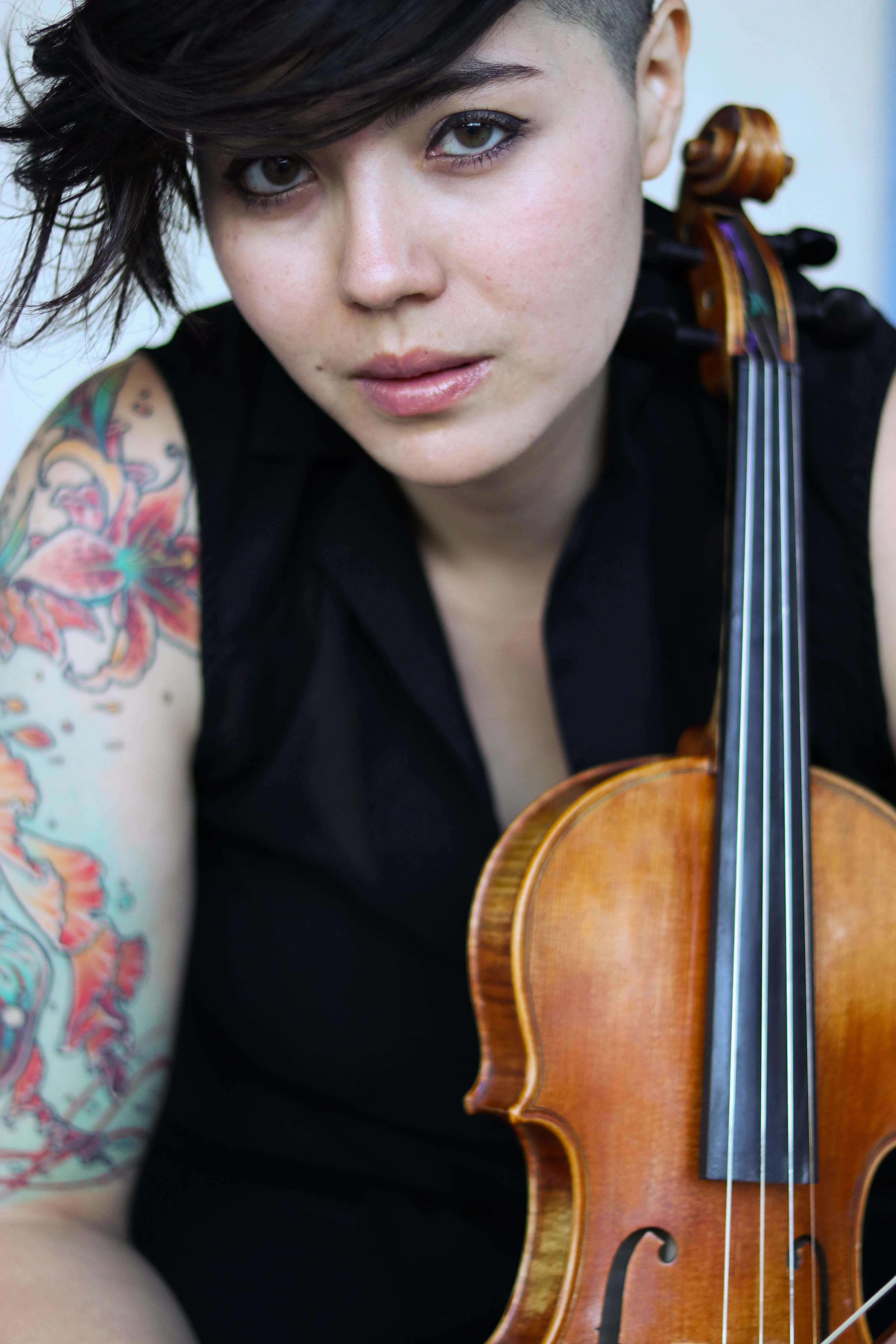 Samantha Bounkeua (She/Her/They/Them)
Classical violinist gone rogue, Samantha Bounkeua aka RogueViolin, is a queer experimental musician, composer and producer specializing in non-traditional violin performance. A graduate from the Oberlin Conservatory of Music, she's performed internationally as a guest artist with the Southern Arizona Symphony, New Mexico Symphony, Oberlin Contemporary Music Ensemble, Britten-Pears New Music Festival, Festival de Opera San Luis, the Rogue Theatre and more. She also appears regularly with Tucson, Arizona music projects including Two-Door Hatchback, Sapphocracy & ChamberLab. In Fall 2019, Samantha was awarded a stART mini-grant from the Arts Foundation for Tucson and Southern Arizona to complete an album about queer subculture, and has been commissioned to write music for the Binational Encuentro (an event about the female migratory experience), ChamberLab, LuftBassoon, Hawkins Dance Company and more. In 2015, Samantha began her position as the personal assistant and project manager to Tim Collins, one of the world's most recognized rock band managers and former manager to Aerosmith and Steven Tyler. In January 2020, Samantha is planning to launch Harbor Lighthouse Studios, an all-inclusive music publishing company, with her business partner, Jeffrey Anthony, a nationally esteemed drummer, producer, and original Music Genome Project team member.

Elizabeth Burden (She/Her)
Elizabeth Burden is a multidisciplinary artist whose works use drawing, painting, sculpture, video, coding, mapping, and other processes to interpret and reinterpret personal, community, and societal narratives about identity, memory, belonging, (dis)placement, (in)visibility, erasure, and the unspeakable. Whether created through studio practice or through community-engaged process, the common thread that runs through all her work is to look at old narratives anew, to confront, reflect upon, shape, and transform them. She believes we can all be creative catalysts for change. 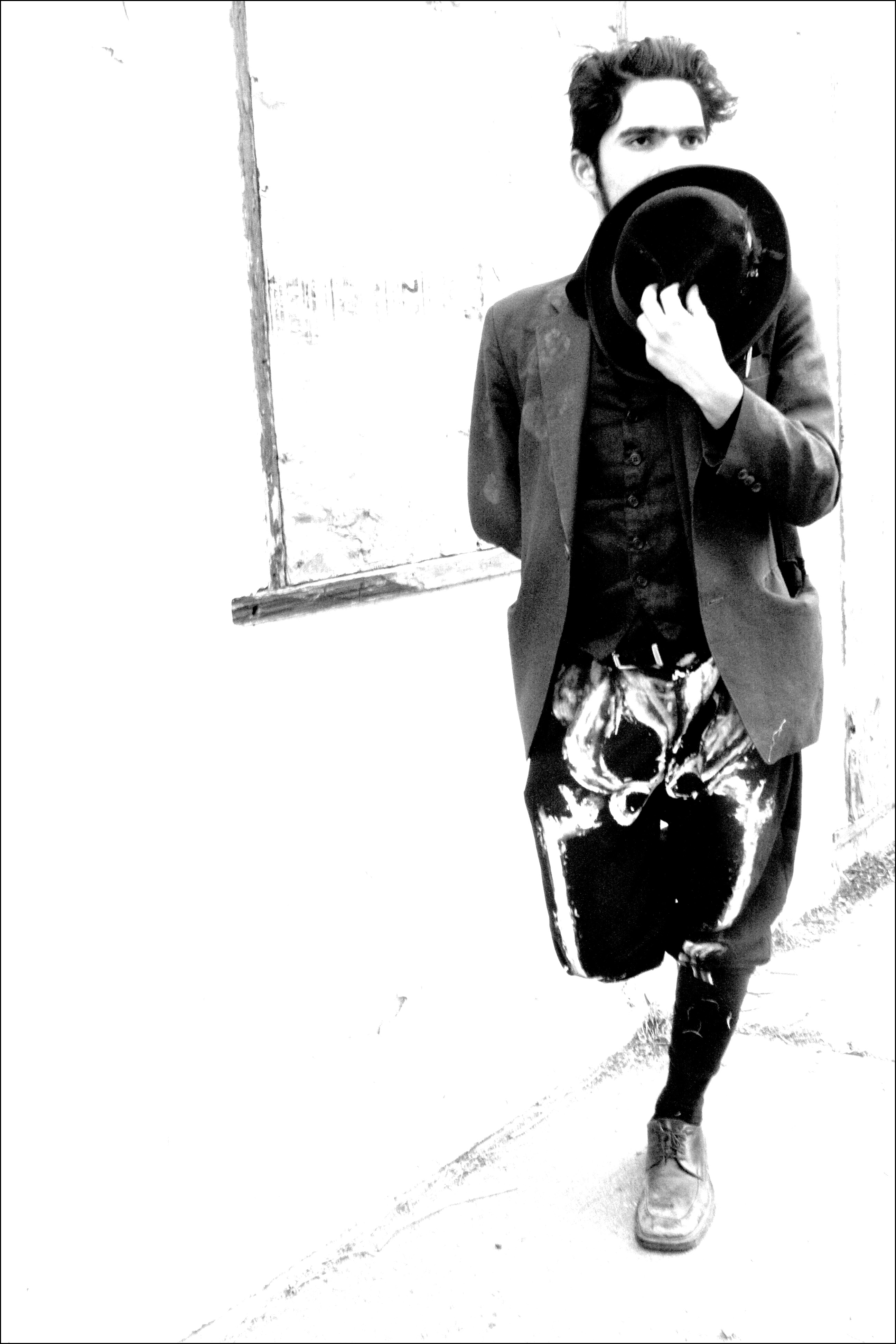 Adam Cooper-Terán (They/Them)
Adam Cooper-Terán (ACT) is a critically-acclaimed video, sound, and multimedia artist from Tucson, Arizona, better known for their collaborations with various theater companies, performance artists, musicians, rabble-rousers, and activists. Their work has featured across the globe in universities, museums, basements, and streets as large-scale projections, musical interventions, and installations of digital storytelling. As a performer, Adam incorporates live video and audio mixing into ritualized improvisations, which have led to highly personal and political spectacles rooted in ceremony and the occult. For more information and overview of their work, visit ANTRAL.NET. 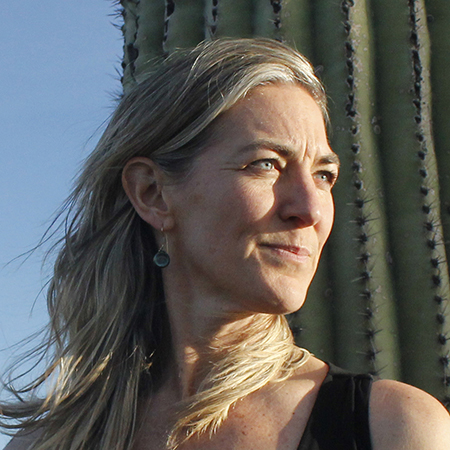 Kimi Eisele (She/Her)
Kimi Eisele is a writer and multidisciplinary artist based in Tucson. She makes stories, visual works, gatherings, and performances to evoke and celebrate kinship with other people, plants, animals, and places. She is the author of THE LIGHTEST OBJECT IN THE UNIVERSE (Algonquin, 2019), a novel about loss and adaptation in a post-apocalyptic America, and her essays have appeared in Guernica, Longreads, Literary Hub, Orion, Terrain.org, and elsewhere. As a performing artist and director, she has created multiple dance/theater projects addressing environmental themes such as forests, saguaro cacti, endangered species, water, urban revitalization, and the food systems. Her visual art focuses on wildlife, landscapes, and the body. Her work has been funded by the Arts Foundation of Southern Arizona, the Arizona Commission on the Arts, National Endowment for the Arts, the Kresge Foundation, and others. She is a folklorist with the Southwest Folklife Alliance, where she edits BorderLore, monthly journal on culture and heritage of the region. 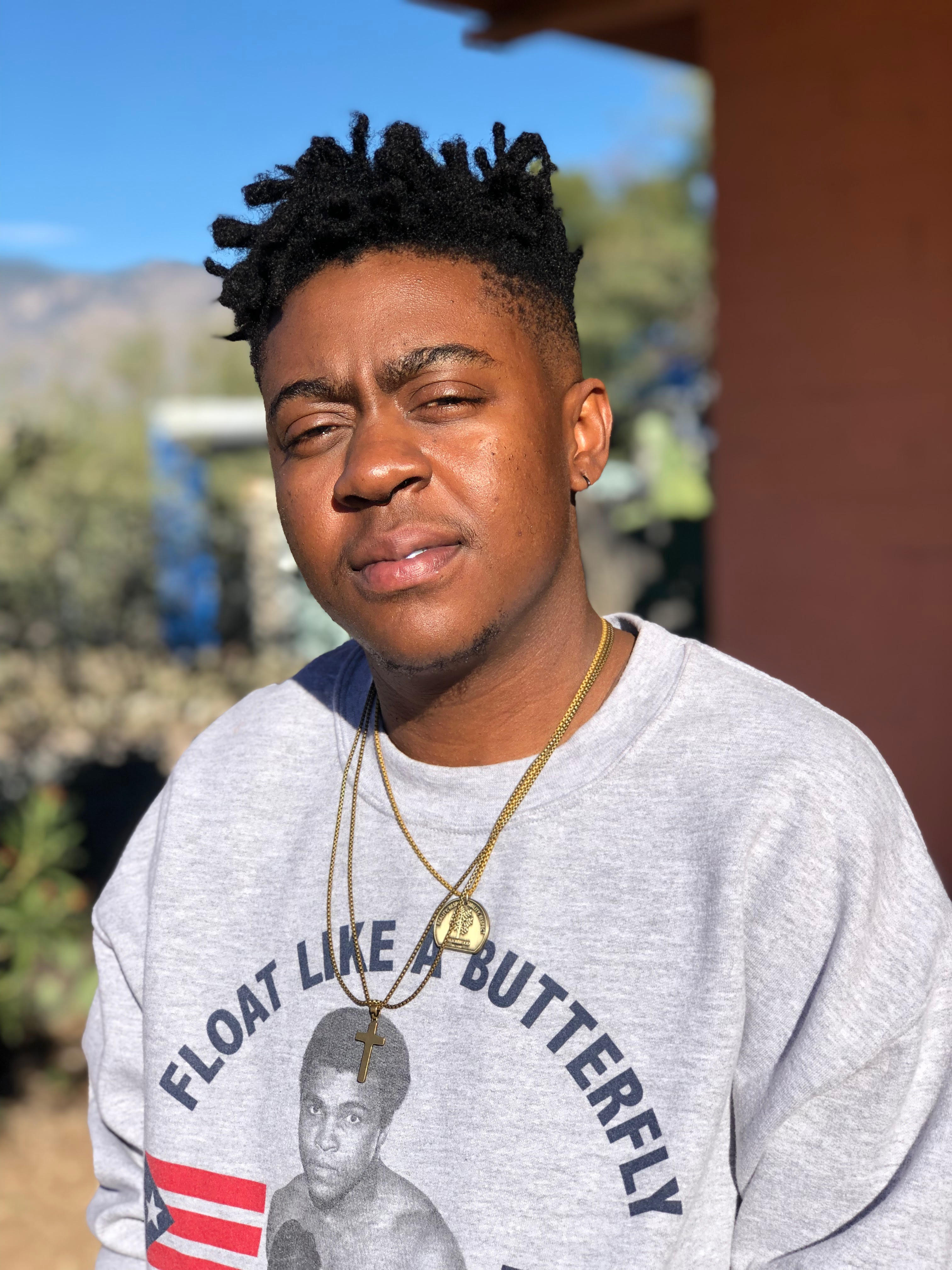 Teré Fowler-Chapman (They/Them)
Teré Fowler Chapman is a black trans activist, writer, educator in Tucson—by way of Sonoran desert | by way of boot’s bayou. This poet is the Words on the Avenue founder and the first African American executive director of the Tucson Poetry Festival. He is a National Arts Strategies’ Creative Community Fellow, and a “Bettering American Poetry 2016” nominee. You can find Teré or their work forthcoming or published in many places, including Huffington Post, University of Arizona’s VOCA, TEDxTucson, Tucson Weekly, Arizona Public Media’s PBS & NPR & more. 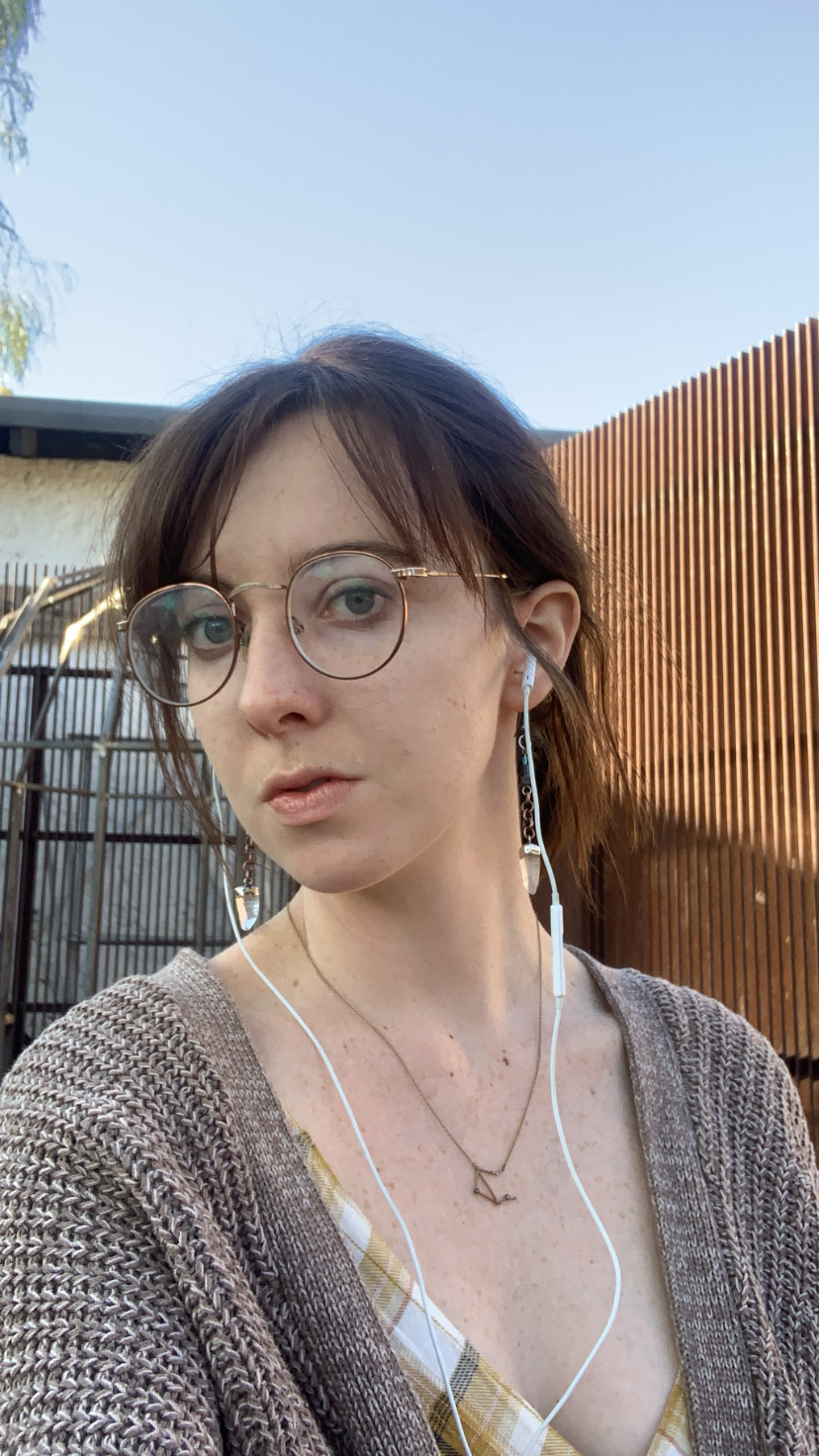 Johanna Robin Hand (She/Her)
Johanna Robin Hand is a multidisciplinary artist, primarily focused in printmaking. Her work is about memory, ephemera, and the detritus we leave in this world. She is interested in exploring new media during a time when collective art spaces and shared tools cannot exist as they have in the past. 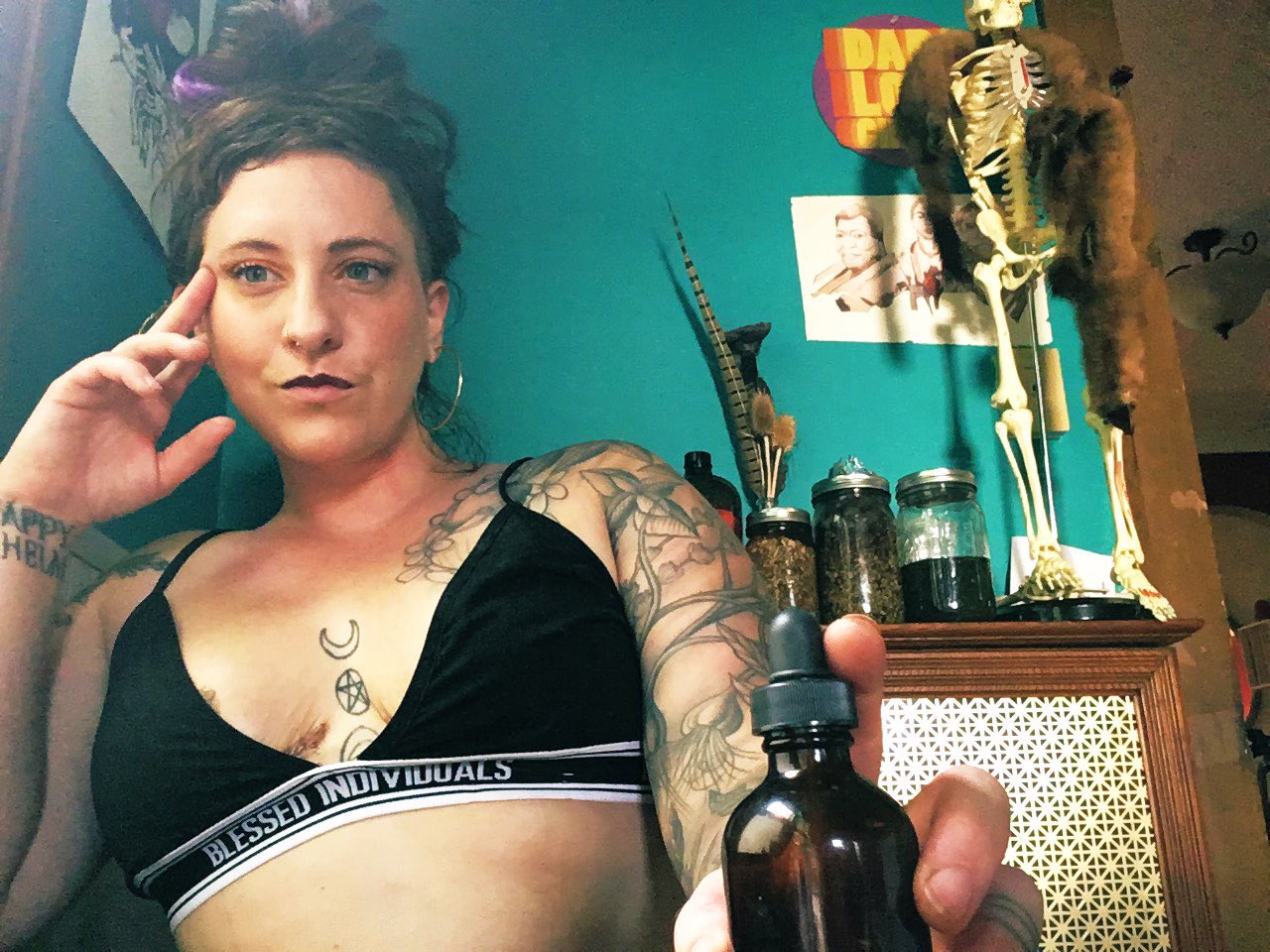 Harlon Meryhew (He/Him)
Harlon is a healer, activist and artist currently living on Tohono O’odham territory (Tucson, AZ). His art focuses on grief, the trans body and the veil between life and death. Using a variety of mediums - he pieces together a ritualistic form of artwork to process the ethereal realm. 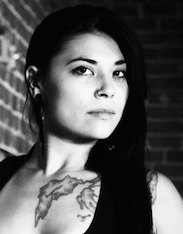 Natalie B Nguyen (They/Them/She/Her)
Natalie Brewster Nguyen is a multi-disciplinary performance and installation artist, writer, actor, movement artist, and educator. They are passionate about social justice, community living, acro, fitness, adrenaline sports, sex workers rights, and radical co-parenting. She co-owns a historic art studio warehouse called the Splinter Brothers and Sisters Warehouse supporting cutting edge, innovative, and political art and performance. Their writing and poetry have been published in several anthologies. They recently created a full length circus play called EXIST with Cirque Roots. EXIST is a poetic and historical narrative about the life cycle of stars, mythology, the history of women in astronomy, and the evolution of human life. They love to collaborate and partner with many artists and companies both locally and internationally. They have been blessed to collaborate with brilliant minds, and have shared the stage with Marina Abramovic, Margaret Cho, Guillermo Gomez-Peña, and other very exciting people. Someday, she hopes to be able to get away with as much as they do. 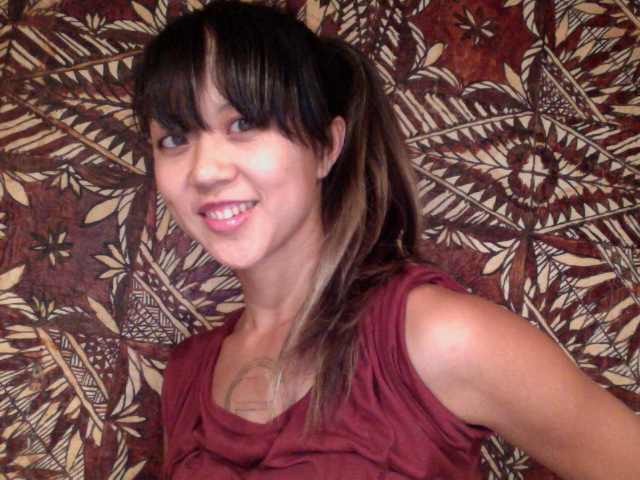 Serena Tang (They/Them/She/Her)
Serena Tang is an interdisciplinary visual and performance artist who brings a unique perspective to their work by infusing their passion for social justice issues. Serena’s work has been featured in HBO’s Random Acts of Flyness, Certain Days: Freedom for Political Prisoners Calendar, and Sky Harbor International Airport. Serena founded Double Happiness Creative in 2001 and has created the branding and style guide as well as being the art director for Edible Baja Arizona Magazine, and the designer at the Tucson Museum of Art. Serena is a founding member of Flight School Acrobatics, an acrobatic performance group, and have taught workshops internationally, including Europe, Canada, Mexico, Costa Rica, and Brazil. Serena currently creates programming for the 101Space at the Pima County Library, a maker space for teens.

Denise Uyehara (She/Her)
Denise Uyehara is a performance artist, writer and director based in Tucson and Southern California. A recepient of MAP Funds for "Shooting Columbus" with the 5th World Collective, and "Dreams/Silhouettes" with Pan Left/Jason Aragon, her most recent work has focused on civil liberties, migration and nation, and what marks us as we cross borders of identity. The book, Maps of City & Body (Kaya Press) documents her work. More info: www.deniseuyehara.com

Victor Valencia (He/Him)
Victor Valencia is a queer, trans, artist of Mexican descent. He was born in central California, and has lived and traveled all over the world. His nomadic life developed him into a very adaptable person. He is an avid community builder, educator, and activist. Most recently, he moved to Tucson from Brooklyn, NY. He has a background in visual art, and is a completely self-taught woodworker, welder, and builder. His company is called Valencia Designs, specializing in custom artisan furniture, fine art and design. His favorite foods are ice cream and tacos. His website is http://valencia-designs.com