For more information on Mexican law and legal research look at the Mexican Law and Legal Research guide created by several librarians who are subject matter experts.

Mexico is a federal republic consisting of a federal government, 31 individual state governments, and a Federal District.

The Federal government is divided into executive, legislative, and judicial branches.  Each branch is covered in more detail below.

The hierarchy of sources of law are constitution, legislation, regulation, and custom. 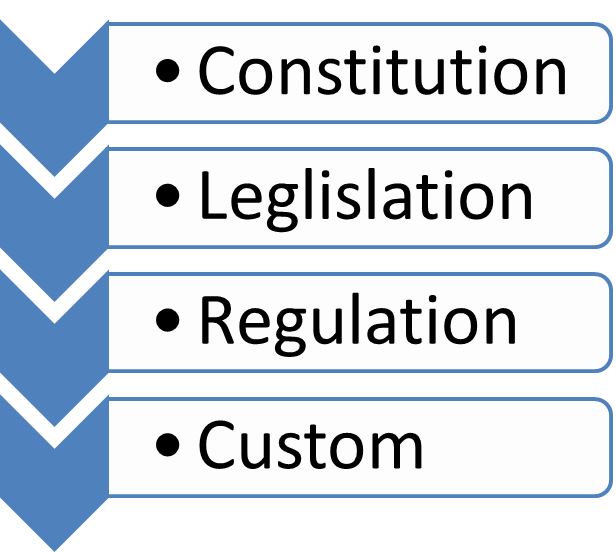 A civil law legal system is statutorily based, which means cases are decided individually by looking at the law.   Unlike in the United States, Mexican case law does not have precedential value. Instead, there is  "jurisprudencia," which is only established when the Supreme Court and the federal collegiate courts issue five consecutive and consistent decisions on a point of law.  When the law is unclear, judges look to legal treatises call "doctrina" written by legal scholars.

The legislative branch of the federal government is comprised of the Senate and the Chamber of Deputies. There are two senators per state and one deputy for every 250,000 people in a state. Senators serve a 6-year term and deputies are elected to a 3-year term.  Neither senators nor deputies cannot be re-elected for an immediately succeeding term.  Each new bill must pass both Chambers by a majority vote. The legislative branch can override by a two-thirds vote in each Chamber.

The Mexican Federal Judiciary is based on a three-tier system similar to the U.S. federal judiciary.

Federal courts have jurisdiction over controversies that arise out of laws or acts of state or federal authorities that violate individual guaranties; controversies between states or a state and federal authorities; all matters involving federal laws and treaties; all sin which the federal government is a party; all matters involving maritime law; and all cases that involve members of the Diplomatic and Consular Corps.