. Skip to Main Content
It looks like you're using Internet Explorer 11 or older. This website works best with modern browsers such as the latest versions of Chrome, Firefox, Safari, and Edge. If you continue with this browser, you may see unexpected results.

Just like on the state level, newly enacted federal laws (called public laws) are codified by topic into a code. Remember from the discussion of Arizona Revised Statutes that codification is the process of taking legislative acts which create/amend statutes and arranging the statutes by topic into a statutory code. The purpose of codification is to put all the current statutes on the same topic together so it is easier to find the laws in effect about a specific topic.

The official version is the print version published by the Government Printing Office (GPO). It is not annotated and the volumes are always several years out of date (the GPO is very slow to publish them) so it is not very good for research puposes. There is also an unofficial GPO version online.

Luckily, commercial publishers moved in to fulfill the need for and up to date and annotated version of the United States Code!

There are multiple unannotated out of date versions of the United States Code available for free online which you can find by Googling.

The United States Code is organized just like the Arizona Revised Statutes and all other state codes. The sections look just like A.R.S. sections. 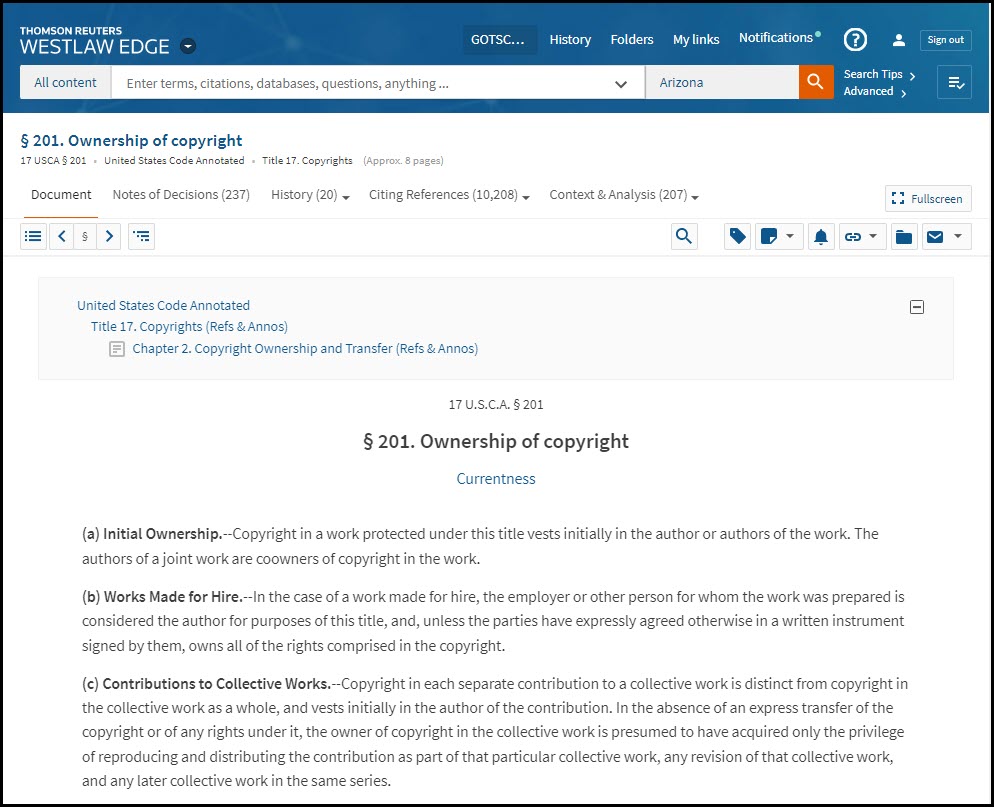 The United States Code has 54 titles (really only 53 because one title is reserved) which are divided into chapters and subchapters.

The titles are divided into chapters and subchapters. 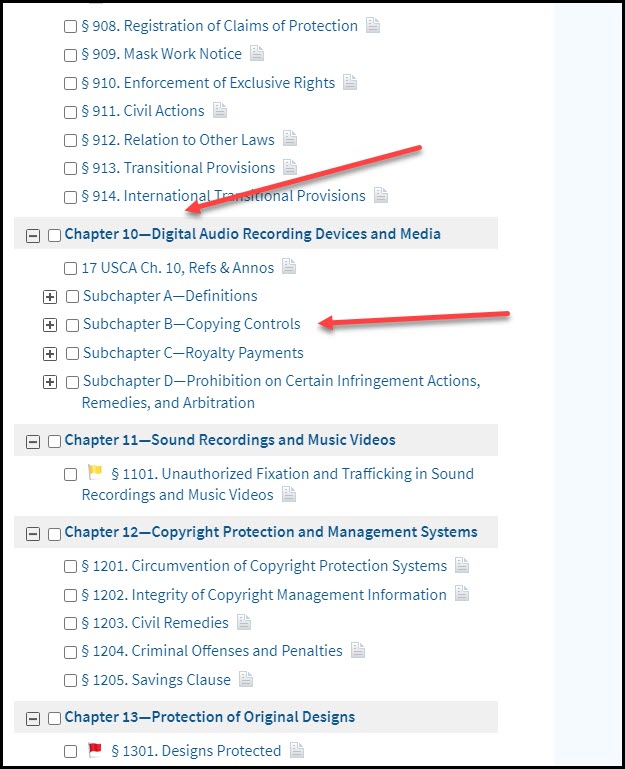 The United States Code Annotated published by West Publishing (available in print and on Westlaw) is an annotated code. This means that it has notes after each code section which are used for research.

Generally each section has the following:

An annotated code is one stop research shopping because you find everything you need in one place.

An unannotated code just has the text of the statute and is therefore not particularly useful for research purposes (except to read the statute). 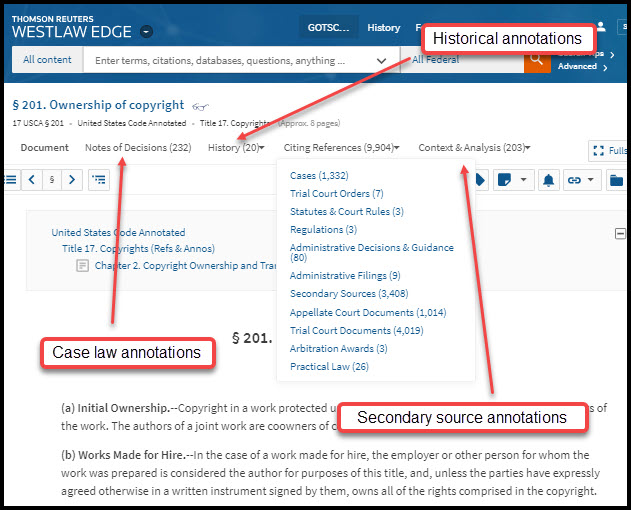 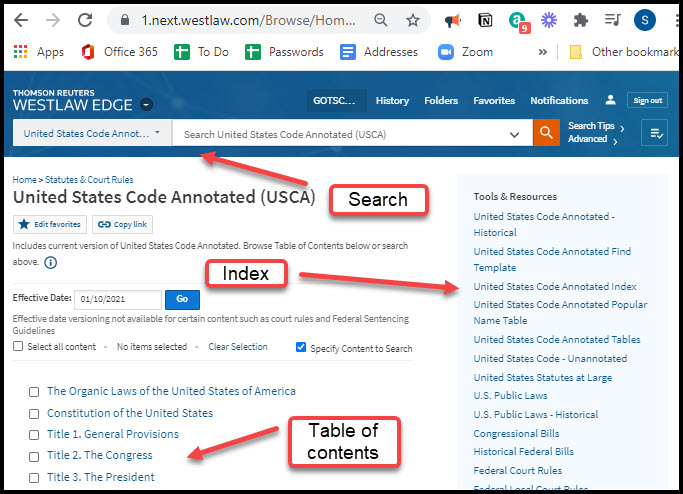 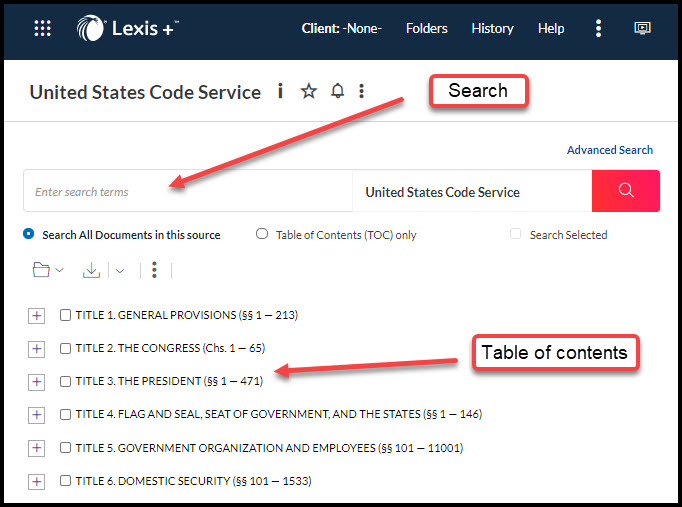 In short, a bill becomes a law (called a public law on the federal level) after it passes both houses of Congress and is signed by the president.

Public laws are published on the GPO website and in the Statutes at Large and are codified by topic in the United States Code. 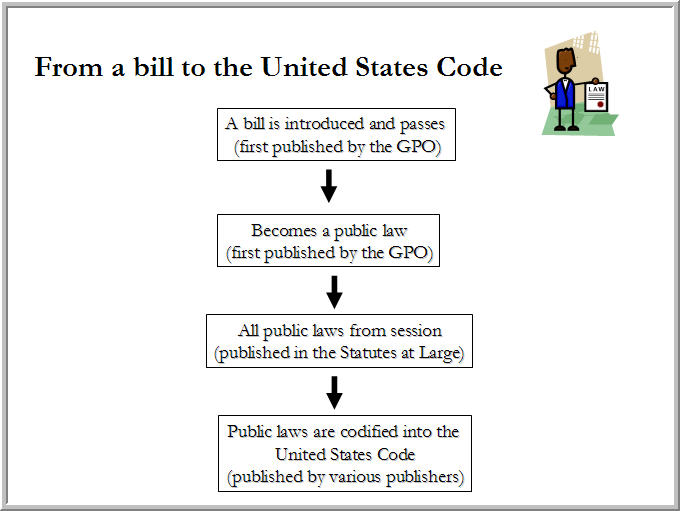 On the federal level, laws (aka acts) have a special name - public laws.

The Obamacare bill that passed both chambers of Congress and was signed by the president became Public Law 111-148 (Pub. L. 111–148). The popular name is Patient Projection and Affordable Care Act. It is a huge public law with hundreds of pages. 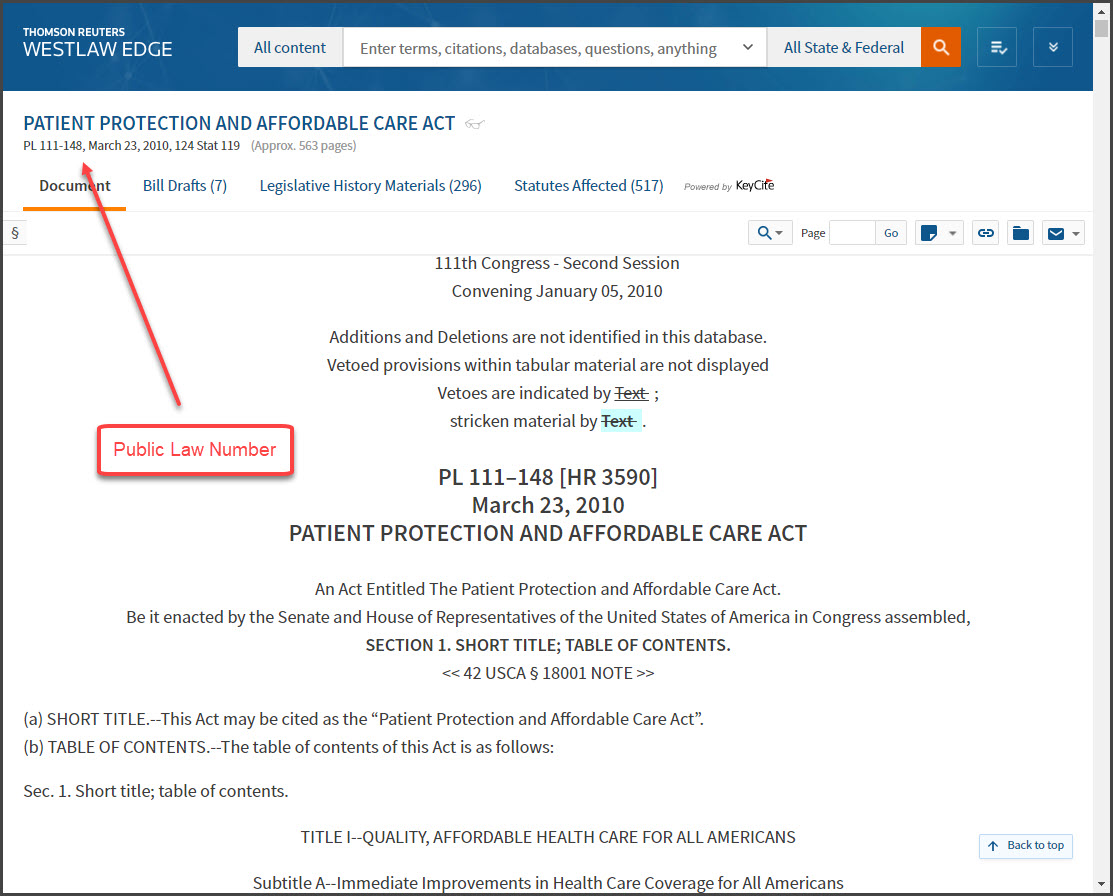 Researching in the United States Code

When you are researching federal statutes you do not need to look at the original public laws. You conduct your research in the codified version of federal statutes which is called the United States Code.

You can look at the history information that appears at the end of a statute to find the original public law which created the U.S.C. section and any subsequent amending public laws.

The Obamacare provision about preexisting conditions is in section 1201 of Public Law 111-148. In a public law, it tells you where every section of the public law is codified. Section 1202 is codified at 42 U.S.C. 300gg-3. 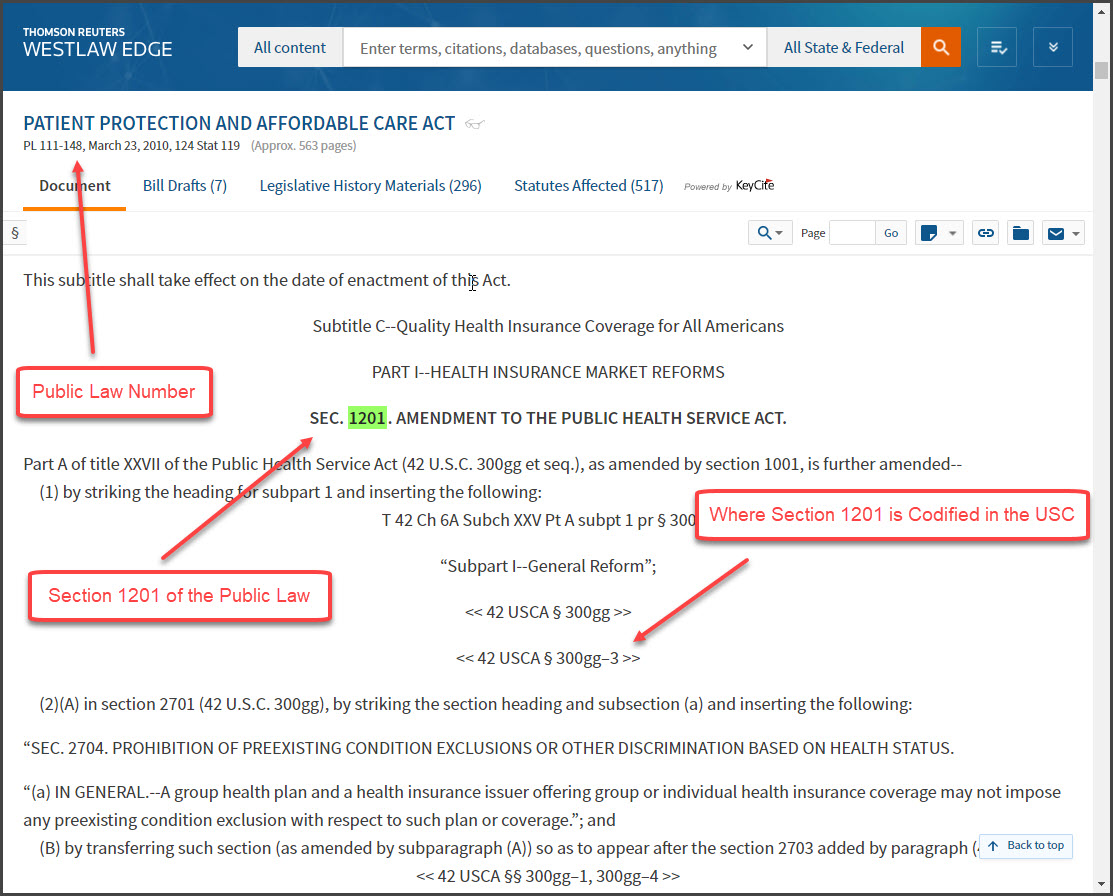 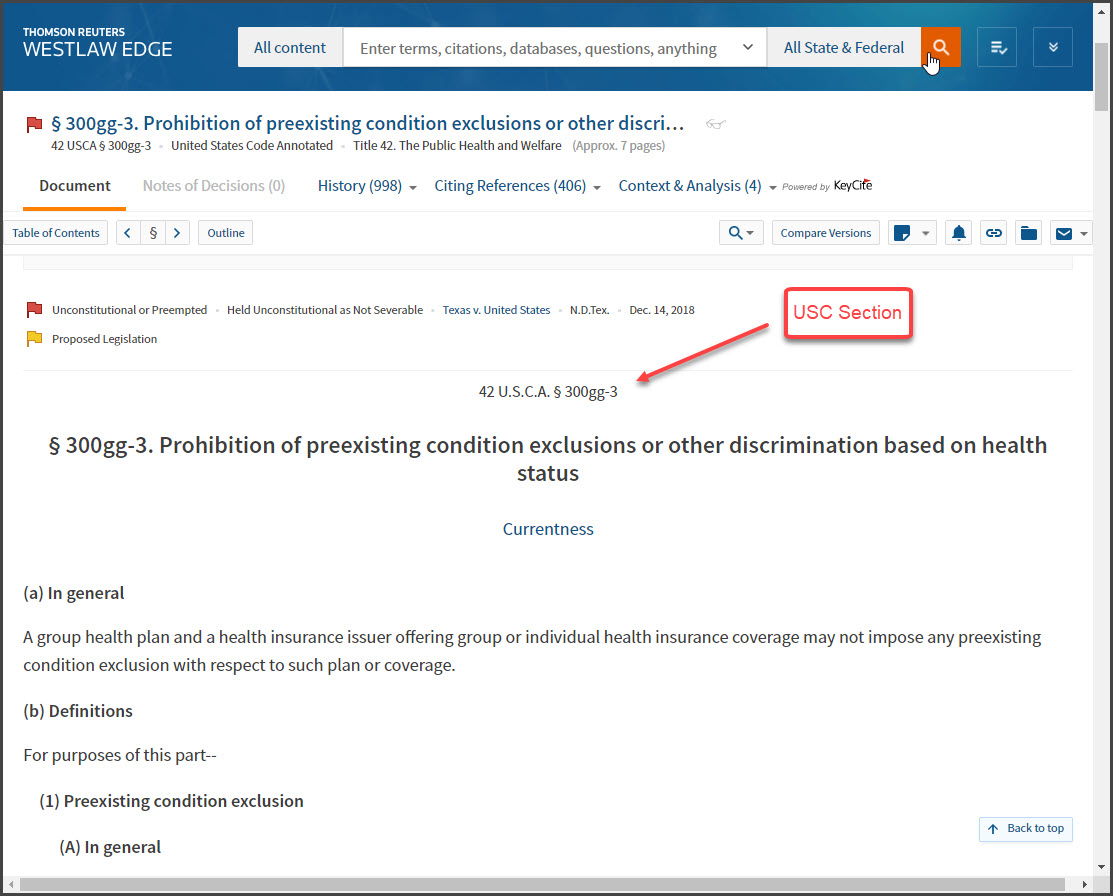