Several generations of fathers and sons studied medicine after the Henkel family settled in New Market, Virginia in 1790. Over the course of their careers, these physicians ministered to their community, tended to their countrymen on the battlefield, and testified in the nation’s courts of law. 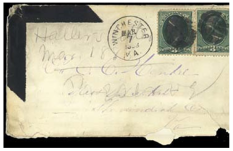 The letters of the Henkel family richly document the daily life of men in medicine in the 19th century and reveal the challenges, rewards and responsibilities of the profession. Covering more than a century of life in the Shenandoah Valley, this exhibition features a selection of writings that cover local events, professional jealousies, the national crisis of the Civil War and the dramatic testimony of the Henkel physicians in a murder trial. Each letter vividly illustrates the writer’s personality and their experiences as physicians.

Credit line:  This exhibition was developed and produced by the National Library of Medicine, National Institutes of Health

At the Arizona Health Sciences Library in Tucson

Additional Resources from the National Library of Medicine

Medical Instruments and Pharmaceuticals in the 1800s