In short, a bill becomes a law/act (called a public law on the federal level) after it passes both houses of Congress and is signed by the president. 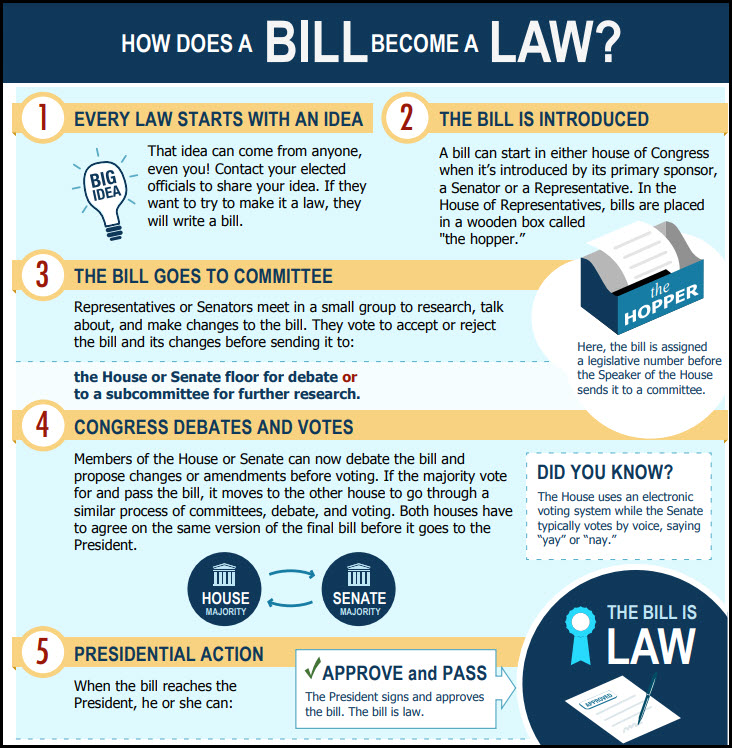 Federal bills that pass both chambers of Congress and are signed by the president become law. There are commonly referred to by different names - laws, acts, and public laws.

There is an act about enhancing border security that was enacted in 2002.

The popular name (also called the short title) of the act is the Enhanced Border Security and Visa Entry Reform Act of 2002. 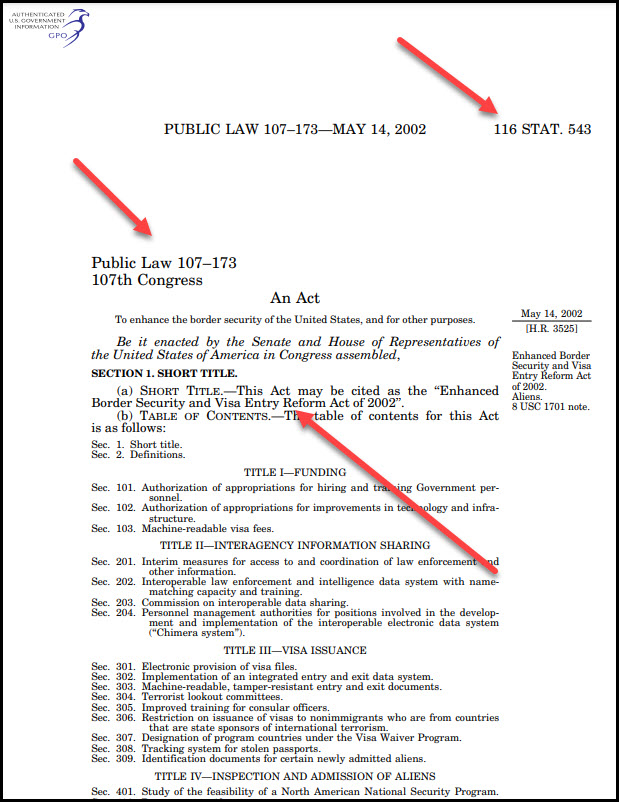 Once it passes, a public law is frozen for all time. Public laws are frequently amended, but there is no way to tell that by looking at the original public law. So, unless you are doing historical research, you never conduct statutory research by looking at an original public law. Current statutory research should be conducted in the codified version of federal statutes which is called the United States Code.

In 2002, a federal act with the popular name Enhanced Border Security and Visa Entry Reform Act of 2002 was enacted. It is a rather large public law with multiple sections listed under 6 different titles. 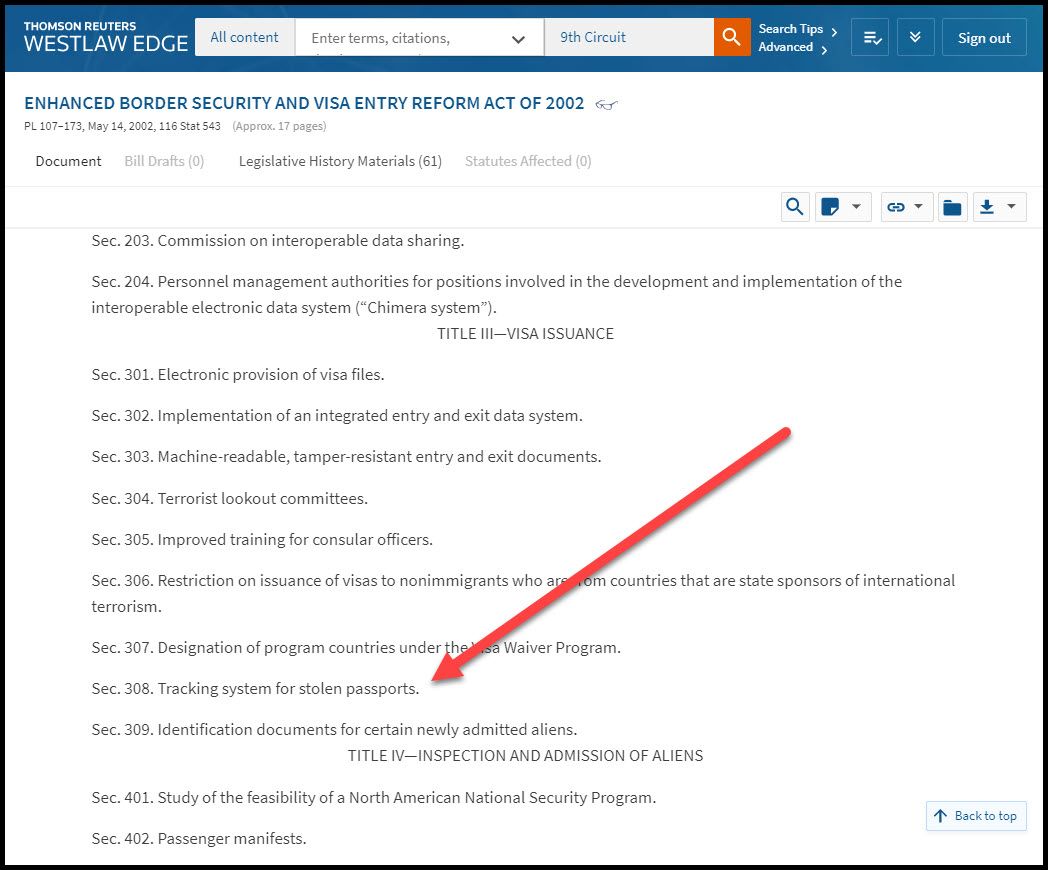 Let's say, for example, that you are interested in the law about tracking stolen passports appears in section 308 of the public law. When you look at the section, you see that the section is codified in 8 U.S.C. 1737. 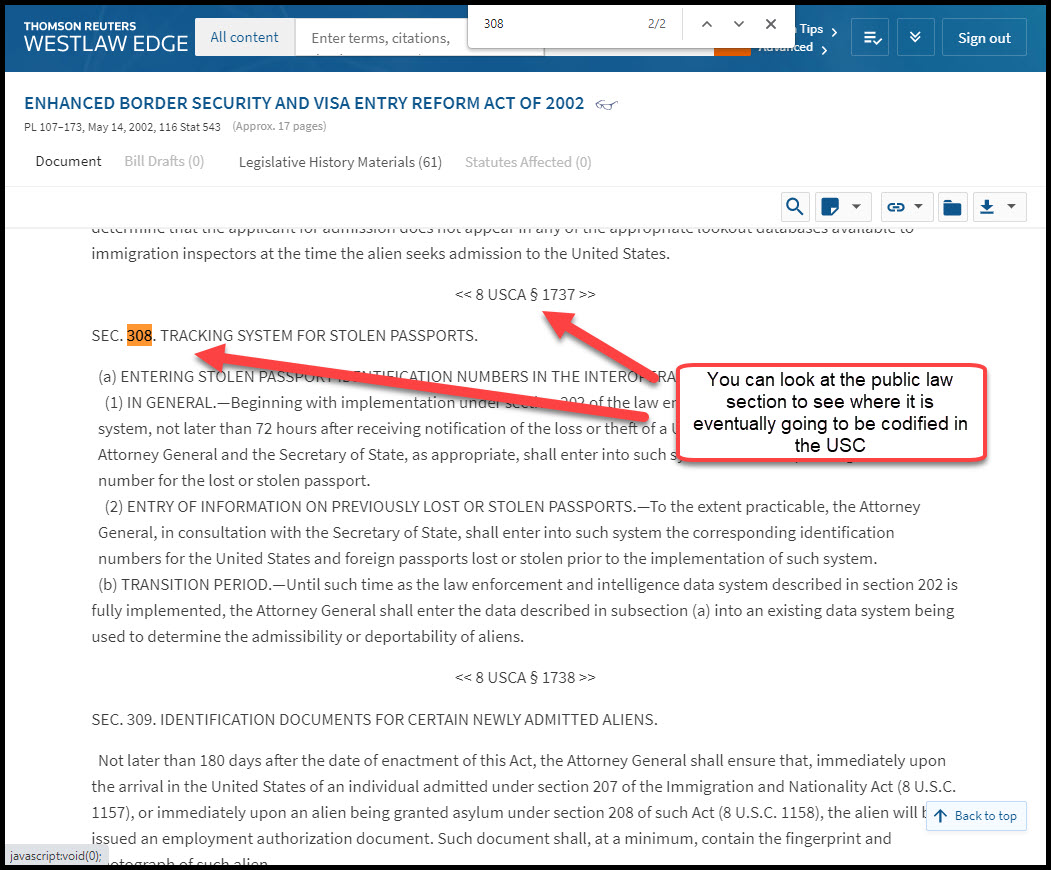 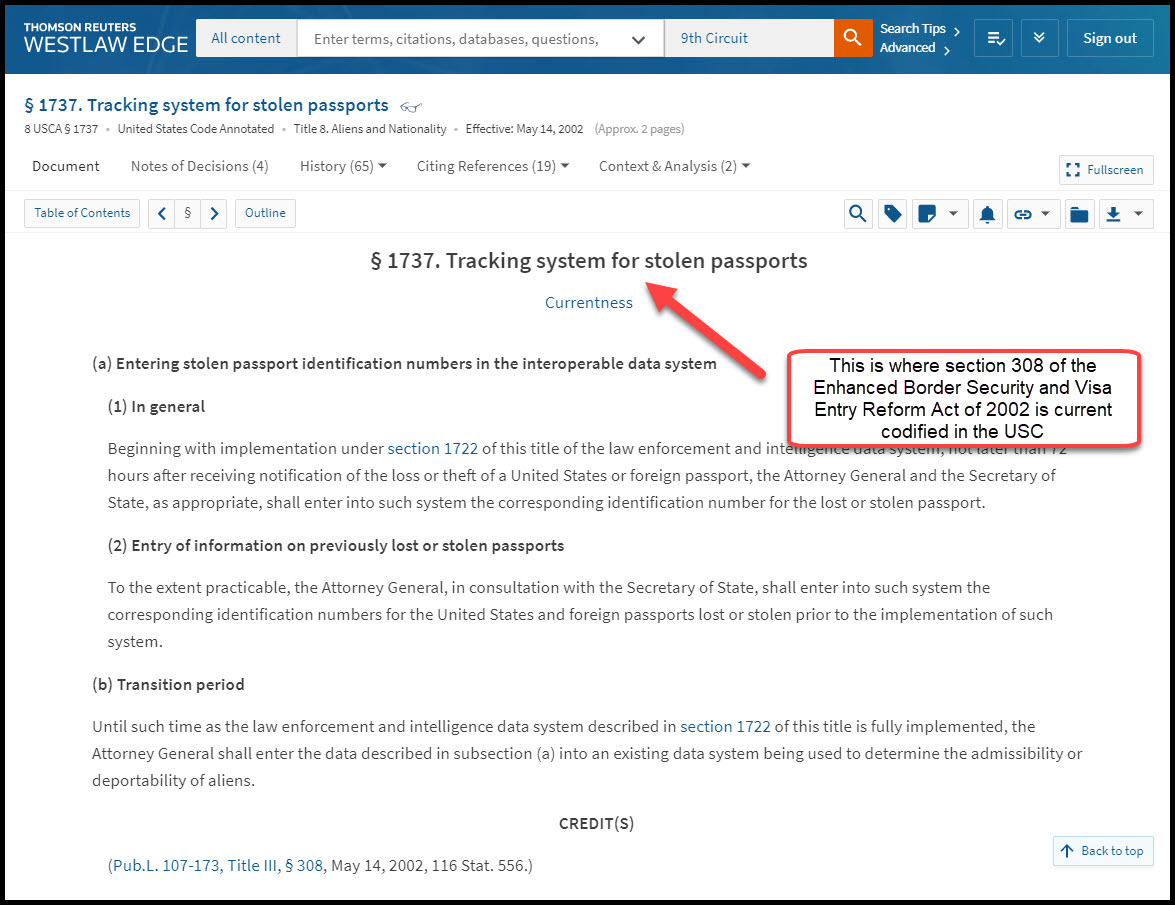 On the federal level, legislators like to give their acts names which are called popular names.

Acts usually acquire these names as they go through the legislative process. A name can describe what the law is about (Enhanced Border Security and Visa Entry Reform Act of 2002 or Immigration and Nationality Act), contain the names of legislative sponsors (McCain-Feingold Act), or be catchy to attempt to gain political support (Development, Relief, and Education for Alien Minors Act (DREAM Act) which is a bill that didn't pass).

There is a free version of the popular names table on Office of Law Revision Counsel United States Code website and tables are also available on Westlaw and Lexis.

To find out where section § 101 of the Immigration and Nationality Act is codified, you can use the Office of Law Revision Counsel United States Code popular name table.

Step 1: Find the the name of the act in the table. 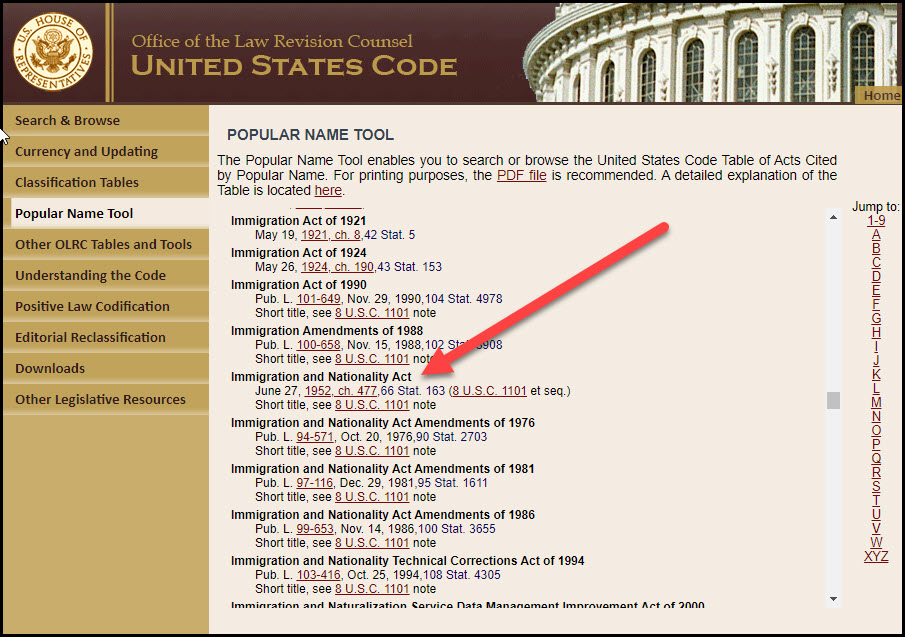 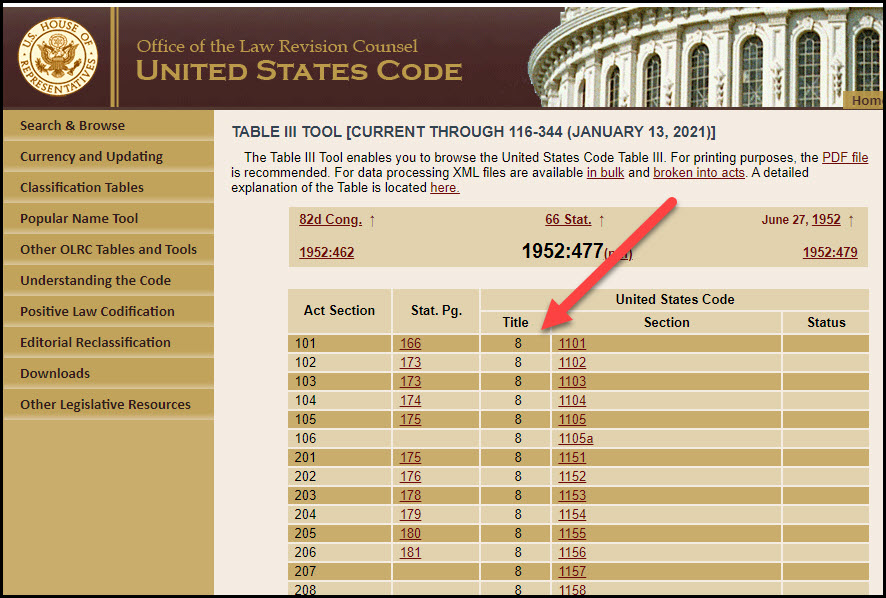 You can use a popular name table for any act, but there is also an INA specific conversion table!

You can find it on the USCIS website, Westlaw, and Lexis and just by Googling. 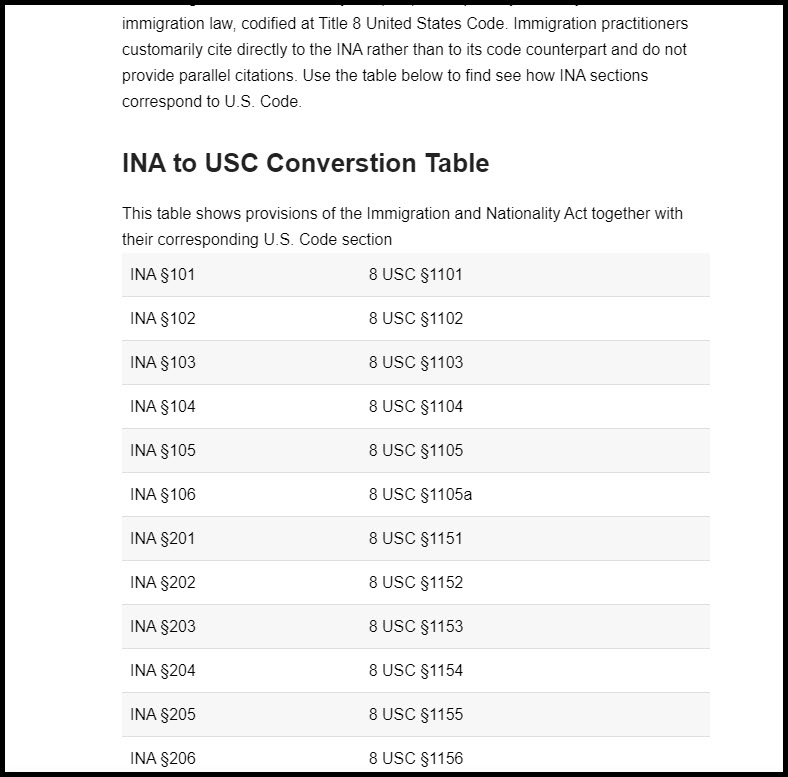