So we have these large executive agencies such as DHS with a lot of statutes and regulations to enforce. How does an agency decide what to do? How does it set its goals and priorities?

Since federal agencies are part of the executive branch which is run by the president, the president has the most control. However, in our three branch system of government with a system of checks and balances, the other two branches play a role.

A director of an agency, for example the director of DHS, listens to the president, reads all the president's directives, and then informs the agencies of its priorities and instructs it in how to operate. Some of these instructions take the form of published memoranda.

Congress exercises control in several ways through the power to confirm presidential nominees, budgetary control, and the power to hold hearings and compel directors to appear and testify about their agencies. It can also change the laws that the agency enforces, remove its powers, or even abolish the agency.

Courts execise control over agencies through the power to review statutes, regulations, and agency decisions. Also, courts can review the presidential directives that instruct agencies.

The president issues executive orders to instruct federal agencies about how to set their priorities and manage their operations.

The president has broad constitutional powers to direct agencies through executive orders and is also granted the right by Congress to issue them on specific topics in accordance with federal statutes.

They are subject to judicial review and may be overturned if they violate federal statutes or the constitution. Executive orders remain in effect until they are cancelled, revoked, modified, declared invalid, or expire.

Executive Order 13769, entitled Protecting the Nation from Foreign Terrorist Entry into the United States, was Trump's first Muslim ban executive order which, among other things, directed the Department of Homeland Security to stop issuing visas to people from certain countries pursuant to his power under 8 U.S.C. 1182(f) to suspend the entry of aliens who would be detrimental to the US.

Executive orders are available from many sources including the Federal Register, White House website, Westlaw, Lexis, and federalregister.gov.

In addition to executive orders, presidents can issue other types of directives to instruct federal agencies about how to set their priorities and manage their operations.

A presidential memorandum is a type of directive issued by the president to instruct agencies. It has the force of an executive order for an agency, but is not required to be published or to cite its statutory or constitutional authority.

A presidential proclamation is a statement issued by a US president on an issue of public concern.

The Center for Migration Studies website provides a list and short summary of recent presidential directives about immigration.

Proclamation on Ending Discriminatory Bans on Entry to The United States (January 20, 2021) - "This proclamation lifts certain restrictions on immigrant visas for nationals of Burma, Eritrea, Iran, Venezuela, Kyrgyzstan, Libya, North Korea, Somalia, Sudan, Syria, Tanzania, and Yemen. US Embassies and Consulates in those countries can resume visa processing and must ensure that pending visa and waiver applications are not prejudiced by the previous bans."

Preserving and Fortifying Deferred Action for Childhood Arrivals (DACA) (January 20, 2021) - "This memorandum directs the DHS Secretary and Attorney General to take all actions necessary and consistent with applicable law to preserve and fortify the DACA program."

Agencies have a lot of laws and regulations to implement and enforce and each agency has to figure out what to do with limited resources.

The possibilities are limitless!

Like any agency charged with enforcing laws and regulations, ICE has to decide how to utilize its enforcement discretion. It cannot arrest all the people who are in the US unlawfully because it would be politically unpopular and hugely expensive. When the director decides how to exercise this discretion, it is announced to the agency through a memorandum.

These memoranda remain in effect until they are rescinded or superceded and are available on the agency's website. 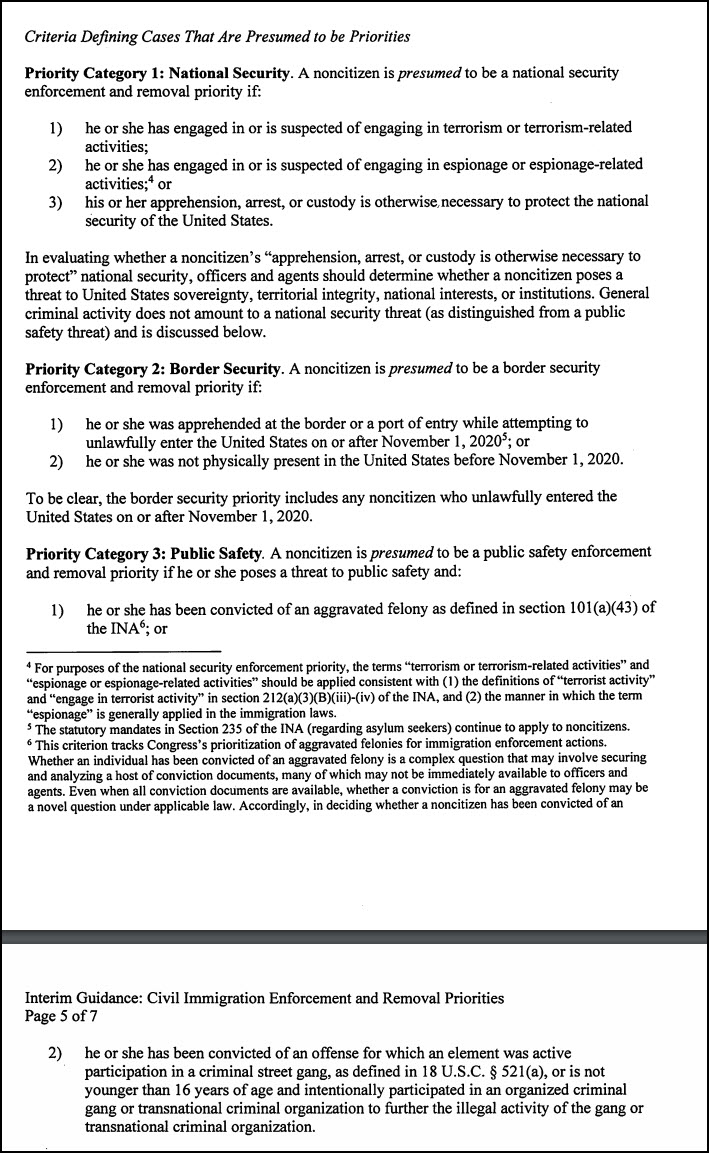 Similarly, the Attorney General has to decide how to utilize its prosecutorial discretion. It cannot prosecute all the people who are in the US unlawfully because it would be politically unpopular and hugely expensive. When the director decides how to exercise this discretion, it is announced to the agency through a memorandum.

These memoranda remain in effect until they are rescinded or superceded and are available on the agency's website.

A 2017 memo from Attorney General Jeff Sessions entitled Renewed Commitment to Criminal Immigration Enforcement instructed prosecutors to step up their efforts to prosecute people for violations of specific federal statutes. 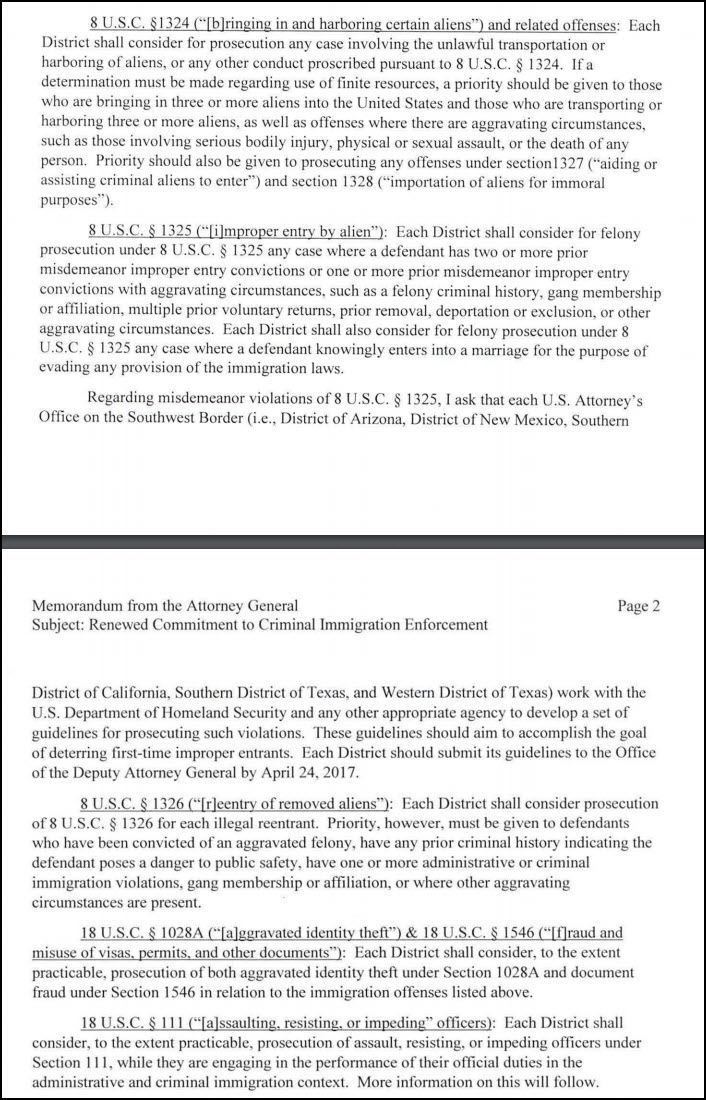