This course will focus on administrative law research skills with a focus on immigration law.

Basically, this just means that the examples and research questions involve immigration law, except for this first week when we cover Arizona administrative law. Since the federal government has preempted states' ability to regulate immigration, there is no Arizona immigration agency and most of the relatively few statutes and regulations that involve immigration are about how immigration status affects access to benefits.

So, since there is no immigration agency, I use the agency that regulates optometrists as an example throughout the materials for this week.

As we know, the United States is comprised of 50 states. Like the federal government, each state has its own governmental system with the three branches of government. Therefore, you need to know how to conduct administrative law research on both the state and federal level.

Since our school is in Arizona, we are going to use Arizona as an example to illustrate state administrative law.

All states and the federal government have an Administrative Procedures Act (APA) which governs agency activities. Agency actions and rulemaking are only valid if agencies have strictly complied with the APA. Any person or organization who doesn’t like an agency action or regulation is going to file a lawsuit claiming it is invalid because the agency failed to comply with the APA, so agencies try really hard to comply.

The purpose of an Administrative Procedures Act is:

An Arizona agency is a part of the executive branch of government (of the three branches of government) that has been created by the Arizona legislature to carry out its legislative will. Legislatures (including all states and the U.S. Congress) create agencies because legislators don't want to try to become experts in everything or to create laws about issues they know nothing about. Therefore, legislatures often enact statutes that create a broad framework for an area of law and then create an agency with the power to make regulations to fulfill the purpose of the statutes and fill in the details, enforce the statutes and regulations, and adjudicate disputes.

The Arizona legislature has created a number of agencies and delegated specific powers to them.

Arizona Board of Optometry Example

The Arizona legislature was interested in NOT having a bunch of folks claiming to know something about eyesight problems/making glasses/optometry running around the state blinding people with quackery. Therefore, it enacted a number of general statutes (go to school, get a license, and don't blind people!) to regulate the practice of optometry (Title 32 - Chapter 16 - Optometry). However, the legislators didn’t know ANYTHING specific about optometry and didn't want to get bogged down in the details of the requirements to be an optometrist, standards of care, licensing fees, disciplinary matters, etc., etc. etc.

So, the legislature created the Arizona Board of Optometry to protect the public's eyesight by regulating optometrists in Arizona. Like most agencies, it has a website which is useful for legal research with links to information and the relevant statutes and regulations.

The Board was created in its current form in 1982 by an Arizona statutory organic act/enabling act which is codified in Title 32 beginning at A.R.S. § 32-1701. 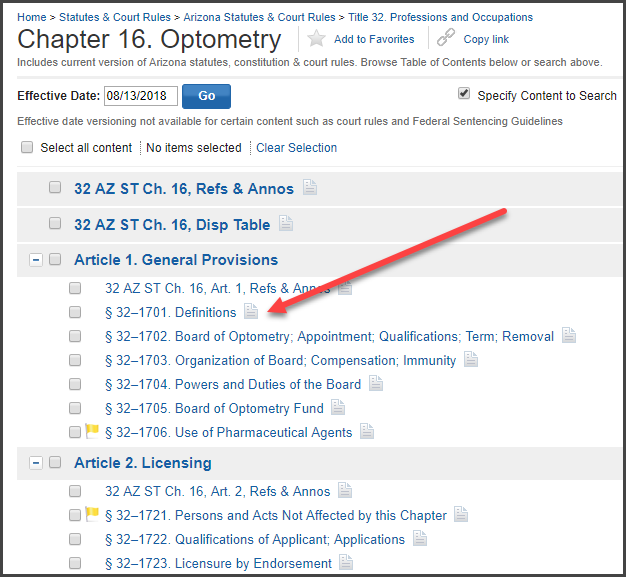 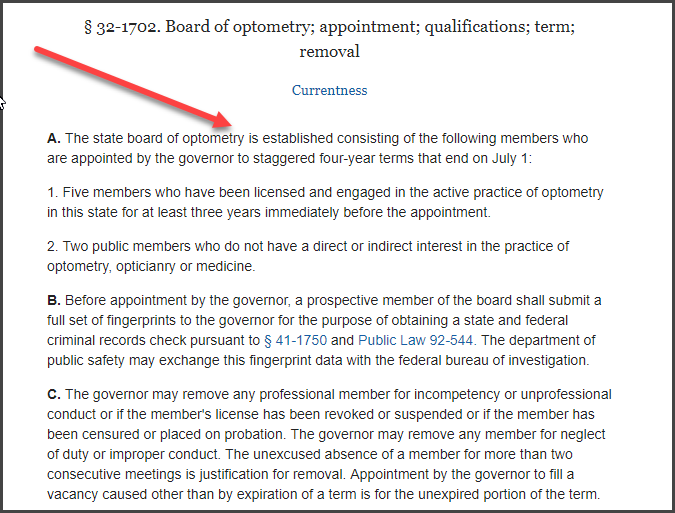 A.R.S. § 32-1704 vests the Board with powers and duties, such as the power to adopt regulations, license optometrists, etc.